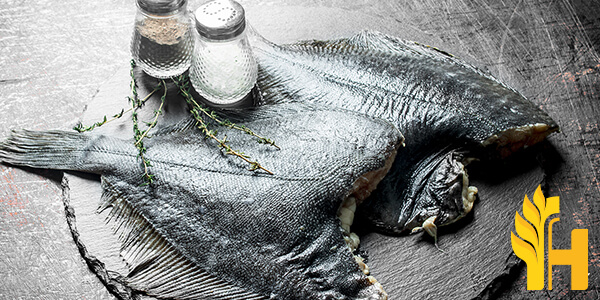 Where to buy and sell Halibut, lowest (cheapest) and highest price.

The Current commodity price of Halibut per kg, pound in the world in the global markets

Halibut is a fish similar to flounder. It is the largest species of flatfish. It is known under several alternate names such as Pacific Halibut, Alaska Halibut, Cow of the Sea, Hippos of the Sea, or Hirame (as a type of sushi). They are an important fish for the industrial fishery. The commonly commercially caught species weigh up to 30 lbs but some halibuts may reach up to 600 lbs in weight and measure up to 8 feet in length.

They are right-eyed flatfish with two distinctive colors on both of their sides. The top side is usually dark in shade, dark brown or mottled brown, while the other side is creamy, creamy-white, or white with some pink undertone. Females usually grow larger in size than males. Average male halibut reaches up to 50 pounds. After butchering the fish yields up to four fillets.

The fish naturally inhabits waters along the seafloor. It lives primarily along the continental shelf, between the deep sea and offshore areas. During some seasons it moves slightly towards the deeper waters while in the other it spends in shallow waters. Halibut is native to the Atlantic and Pacific Oceans. It is naturally distributed from the western coasts of North America, and across Asia and Russia as well as the eastern and western coasts of the Atlantic Ocean.

It is a very important fish for commercial and industry fishery as well as sportfishing industry. It is a great source of food due to its tasty and nutritious meat. Due to excessive fishing which resulted in overfishing, the population of halibut has been significantly reduced. Atlantic species have been listed as endangered while Pacific species have not been that badly affected.

Halibut meat is quite tasty and easy to prepare. It is also an excellent source of minerals, vitamins, and other important compounds. It contains selenium, niacin, phosphorus, magnesium as well as vitamin b12 and b6. Just like other types of fish, it is a rich source of natural omega-3 fatty acids. It also contains lots of proteins that are responsible for building and supporting muscles and bones.