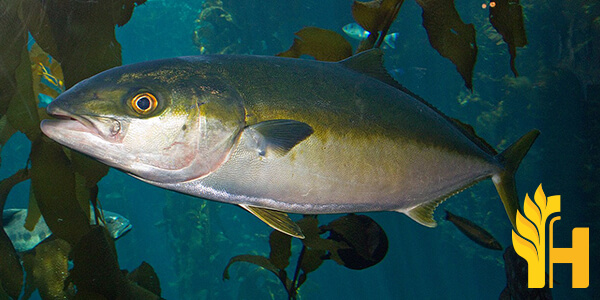 Where to buy and sell Greater Amberjack, lowest (cheapest) and highest price.

The greater amberjack, also known as the allied kingfish, great amberfish, greater yellowtail, jenny lind, purplish amberjack, reef donkey, rock salmon, sailors choice, yellowtail, and yellow trevally is a species of predatory ray-finned fish in the family Carangidae, the jacks and pompanos. It is found in temperate, subtropical, and tropical seas around the world. It is a popular quarry species for recreational fisheries and is important in commercial fisheries. It is the largest species in the family Carangidae.

The greater amberjack body has an elongated fusiform shape with blue or greenish sides and silvery flanks. It is covered with small scales except on the cheek, breast, and base of the large caudal fin. In adult males, the upper opercle is almost flat and has a weak ridge along its margin. Both jaws of mature greater amberjacks contain bands of villiform teeth. The first dorsal fin consists of eight spines and is followed by a variable number of detached rays. The second dorsal fin has one spine and between 20 and 24 soft rays, although the first few can be hard to distinguish from the detached first dorsal fin spines. It differs from the smaller greater amberjack by its much larger size, bluish-green coloration rather than olive-green, and silvery instead of blue flanks.

The greater amberjack has a widespread distribution in the tropical to subtropical waters of the Atlantic Ocean, ranging from eastern Canada to southern Brazil in the west, including Iceland and western Africa. It also occurs throughout the Indo-Pacific region from Japan to Australia. In general, it inhabits the higher grounds of the continental shelf, particularly reef fronts, flats, and slopes. It is often found near offshore islands or along headlands. This species often forms large schools over deep water but it also makes extensive migrations into shallow coastal feeding areas.

The greater amberjack has a varied diet consisting mainly of small schooling fish including sardines, herring, anchovies, and mackerels. Squid and crustaceans such as shrimp and crabs are also eaten. The fish is an active predator, taking advantage of schooling fish at the rich edges of coral reefs. It shoals to swim in the open water over reefs during the daytime and feeds actively during this time. At night, it seeks shelter in reef channels or caves to rest.

The greater amberjack's reproduction can either be sexual or asexual depending on the fish's size. In the Mediterranean, fish below a certain length are all female and reproduce through parthenogenesis. In other areas, such as Japan, males can be found in much larger numbers as they actively pursue females during their migrations to shallower waters for spawning. The fish produces large eggs which are buoyant and pelagic, growing to about in diameter. There is no parental care in the species after spawning. The greater amberjack has a long lifespan, living for at least 8 years.

The greater amberjack is an important target of commercial and sports fisheries throughout its range. It is an excellent food fish and is also considered a game fish due to its impressive size and strength. It is a popular fish for recreational fishing and is often caught n the Caribbean with harpoons, spearguns, or baited hooks. Greater amberjack is sold fresh or frozen in markets or can be found canned in stores.