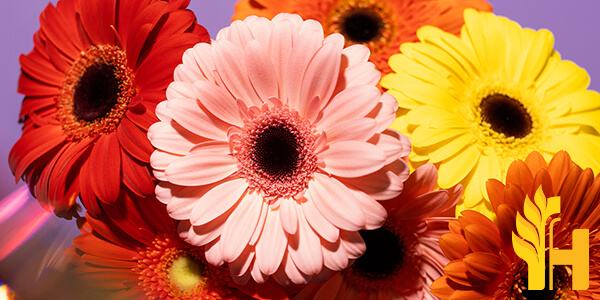 Where to buy and sell Gerbera, lowest (cheapest) and highest price.

The Current commodity price of Gerbera per kg, pound in the world in the global markets

Gerbera is often referred to as African daisy, Hilton daisy, or Transvaal daisy. It is a perennial plant closely related to sunflowers. Its colorful and scented flowers attract birds, butterflies, and bees. It is commonly used as an ornamental plant. Its name comes from a 19th-century German naturalist, Traugott Gerber.

It grows up to 18 inches tall from a basal clump of leaves that are leathery and often occurs in dark green color. Some species may reach up to 30 inches in height. It creates large daisy-like flowers that are come in a vast range of colors such as yellow, orange, red, pink, white, and cream. The flower is able to produce new flowers continuously up to six months after the first blooming.

Gerbera is native to South Africa but grows in wild also in some regions of Asia and in Madagascar. It grows on rocky slopes, grasslands as well as in sandy soils. It grows best in tropical, subtropical, and temperate climates and is quite tolerant in terms of infertile soils. It likes full sun or partial shade areas and is not cold resistant. It does not grow in temperatures lower than 7 degrees C.

The flower is divided into four main groups. Single flowers, double or duplex, crested doubles, and full crested doubles. They differ in terms of the set of their petals and the appearance of their centers also called the eyes. Depending on the species the flowers may differ in size and color. There are almost 40 known species of Gerbera. It began to be commercially bred in the 19th century. For the first time, it was cultivated in Europe and then in the Himalayan region.

Gerbera apart from their ornamental purposes is quite often used for their medicinal uses. They are believed to be the best remedy for colds, coughs, headaches, and rheumatism. It also indicates antispasmodic effects and can treat various kinds of mouth sores. Its strong scent may be a nuisance for people suffering from asthma. It is not a poisonous plant for home pets but various parts of the plant may cause vomiting when consumed.

In 2019, global production of gerbera amounted to around 4.3 million tonnes, an increase of approximately 1% compared to the previous year. The majority of gerbera production takes place in Asia, with India and China being the leading producers, followed by Africa and South America. The most popular variety of gerbera is Gerbera jamesonii, which is native to South Africa. It is a popular choice for gardens and bouquets due to its large, vibrant flowers. Other popular varieties include Gerbera daisy (Gerbera houstoniana) and Transvaal daisy (Gerbera viridifolia). The demand for gerbera is largely driven by the cut flower industry, as the flowers are often used in bouquets and floral arrangements. The majority of gerbera production takes place in developing countries, where the labor costs are lower and the climate is favorable for cultivation. The global gerbera market is expected to continue growing in the coming years, driven by the increasing demand for cut flowers. The Asia-Pacific region is expected to be the main driver of growth, due to the growing population and middle class in countries such as China and India.