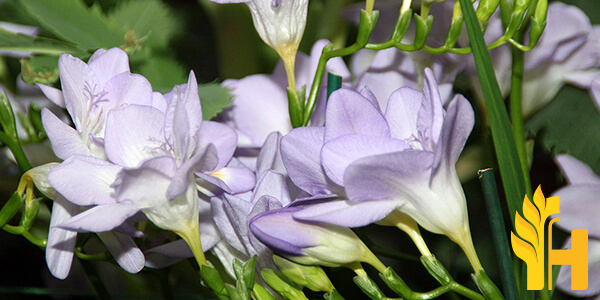 Where to buy and sell Freesia, lowest (cheapest) and highest price.

The Current commodity price of Freesia per kg, pound in the world in the global markets

Freesia is a genus belonging to the Iridaceae family. The family is native to southern Africa, mostly to the rainfall areas of South Africa. This genus has a long history of being hybridized and cultivated in Europe and is a very important horticultural species. It is usually grown indoors a pot plant or in gardens in mild climates. They are especially important for the cut flower industry.

The plant is characterized by its grassy leaves that are produced by grom corms (bulblike structures). The most characteristic feature of the plant is the flowers it creates. They most often occur in a vast variety of colors but most commonly are available in white, yellow, orange, and blue. The flowers are distinguished by their mild lemon-like scent. The flower spikes usually reach up to 50 centimeters. They turn to the right from the stem and display flowers in a gentle arch or in a horizontal line.

The flower is cultivated for its ornamental and decorative purposes. The main two species used to create new cultivars are Freesia refracta which is characterized by its yellow or white color, and F. Armstrongii which creates creamy white or slightly pink-tinted flowers. The cultivar widely used as a garden ornamental is commonly called the flowering grass. It is the species F. Laxa that produces flowers in a vast range of colors.

Freesia is quite easy to grow from seeds. It starts flowering in one to two years after planting. The flower also reseeds itself, especially in places where it is happy to grow. All cultivars create so-called cormels which can be used to grow them in the future.

They are quite important for the horticulture and cut flower industry as they are commonly cultivated for ornamental purposes. Their nice smells are also often used in the production of cosmetic products. They are cultivated all year long almost all over the world in special greenhouses. The flower is produced on an industrial scale in many countries but the Netherlands is the leading producer of this species, followed by Japan, China, and the United States.

Freesia is a genus of flowering plants in the family Iridaceae, native to South Africa. The genus comprises about 11 species of evergreen perennial herbaceous bulbs. The most common freesia in cultivation is Freesia refracta, which has white or yellow flowers with a sweet fragrance. Freesias are grown commercially for the cut flower industry, and are popular as ornamental plants in the garden. They are generally easy to grow and care for, and will bloom reliably for many years with minimal maintenance. Freesia production is mainly concentrated in South Africa, with smaller operations in Australia, New Zealand, and California. In South Africa, the growing season for freesias extends from September to May. Production begins with the planting of corms (bulbs) in late summer or early fall. The corms are then allowed to vernalize or rest, for a period of six to eight weeks. This process helps to ensure that the plants will flower properly once they are transplanted into the field. After vernalization, the corms are planted in the field at a depth of about 10 centimeters (4 inches). They will remain in the field for the duration of the growing season, during which time they will require regular watering and fertilization. Once the plants have flowered, they are harvested and the corms are removed. The corms are then cured and stored until they are ready to be replanted the following season.