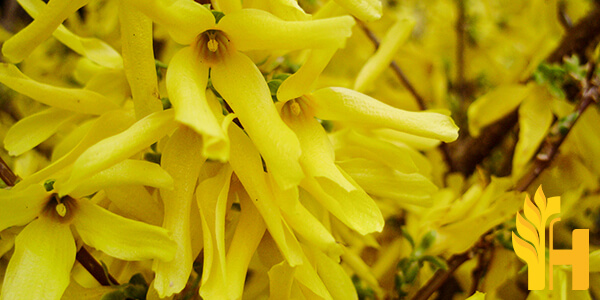 Where to buy and sell Forsythia, lowest (cheapest) and highest price.

Forsythia is a shrub that can reach up to 8 feet in height. It has got green stems that with time turn woody and produce rough greyish brown bark. For most of the year, the shrub is covered with dense green and bright green leaves but is the most recognizable in spring when it creates an abundance of yellow flowers. Forsythia flowers are bell-shaped, have four petals, and occur densely on the stems.

It is a fast-growing plant that naturally arches over, but there are many more cultivars that may differ and be more rigid or splayed. It requires regular pruning as it tends to become too scraggly and too leggy. They make an ideal plant to form gedges. After blooming season, the shrub is densely covered with leaves which ensure sound screen and make great privacy. The shrubs require low maintenance. They grow best in full sun areas or partially shaded ones in well-drained soil. They may require watering in extended dry periods.

They make a perfect addition to every garden and landscape as they start blooming quite early in spring. They are often referred to as the garden’s wake-up alarm. They are also great to create a natural fence in a type of stellar hedge. Its fruit is used for medicine. It is used especially for various cases of swelling, tonsillitis, sore throat, vomiting, heart disease, gonorrhea and to treat skin rash as well as feel.

The plant is known all over the world and cultivated in many places for its ornamental and medicinal purposes. It is considered one of the 50 fundamental herbs in Chinese herbology. In some places, it is known under the common name „Easter tree” as it usually blooms at the time of this holiday. The shrub was introduced in the United States in the early twentieth century. Nowadays forsythia is known in many different species, most of which are native to China and Korea. Two of the species are commonly cultivated for their ornamental purposes - Forsythia × intermedia and Forsythia suspensa. They are both spring-flowering shrubs characterized by their intensive flowering and bright, vibrant yellow flowers.