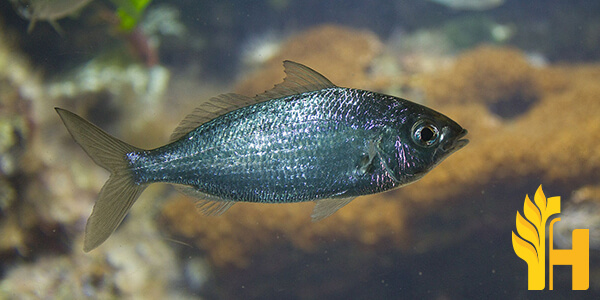 Where to buy and sell Flagfin Mojarra, lowest (cheapest) and highest price.

The Flagfin Mojarra, Eucinostomus melanopterus , is a member of the Mojarra or Gerreidae Family and is known in Mexico as mojarra de ley. Globally, there are eleven species in the genus Eucinostomus, all found in Mexican waters, with seven in the Atlantic and four in the Pacific Ocean.

The Flagfin Mojarra is only distinguished by a black spot at the base of the pectoral fins, but this location is hard to see on most specimens. The Flagfin Mojarra has brassy overall coloring with greenish reflections that are more prominent along the lateral line. A dark brown stripe is present from the mouth to above the pectoral fins. The lateral line is a silver-white color that extends below into a forked caudal fin.

The Flagfin Mojarra inhabits rocky and coral reefs, most frequently associated with dead corals, from shoreline inshore waters to depths of up to 149 feet (45 m). It is usually solitary or occurs in pairs, and feeds on a variety of invertebrates.

While the Flagfin Mojarra has been recorded from Mazatlan southward along the Pacific coast of Mexico, it has not been reported from Baja California Sur. The species is primarily caught by trawls and not by hook-and-line. It is a generally uncommon species, but has been recorded in larger numbers from off Punta Banda and Isla San Roque, however it is also common off Puerto Vallarta.

The Flagfin Mojarra does not form large schools but sometimes aggregates with other members of the genus Eucinostomus. Adults are primarily found in shallow water extending down to 98 feet (30m); while juveniles are mostly associated with coral reefs.

The Flagfin Mojarra is of limited interest to fisheries, but the species is occasionally caught by trawl or seine fisheries for human consumption. There are no data on population trends.

The Flagfin Mojarra is a small fish, growing to a maximum overall length of 9.8 inches (25 cm), and most do not exceed 8 inches (20 cm). They have been reported as reaching an age of six years. The Flagfin Mojarra is considered a good food fish, and is often sold fresh in local markets. Other members of the genus Eucinostomus are also used for human consumption.