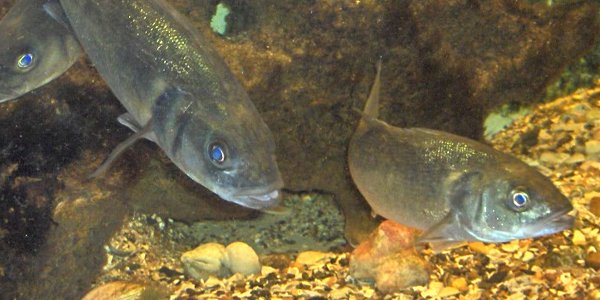 Where to buy and sell European Bass, lowest (cheapest) and highest price.

The Current commodity price of European Bass per kg, pound in the world in the global markets

The European bass or common bass (Dicentrarchus labrax) is a member of the sea bass family (Serranidae) native to brackish and marine waters of western Europe from Morocco to Norway. A popular game fish, it has been introduced into areas like the Mediterranean, Black Sea and the Great Lakes. It grows to a maximum length of 120 cm (47 in) and a maximum weight of 18 kg (40 lb). The European bass is a large fish, reaching up to 1.2 m (4 ft) in length and 15 kg (33 lb) in weight. The body is elongated and compressed, with a large, triangular head. The lower jaw protrudes slightly beyond the upper jaw. The teeth are sharp and pointed, arranged in rows on the jaws and tongue. There are three dorsal fins and two anal fins. The caudal fin is forked. The body is covered in small scales. The colouration of the bass is variable, but typically the back is dark green to brown, with a paler underside. Young fish are often striped or spotted. The European bass is found in coastal waters across Europe. It occurs in the Mediterranean Sea, the Black Sea and the Atlantic Ocean. In the eastern Atlantic, its range extends from Iceland and Norway southwards to Senegal. In the western Atlantic, it is found from Newfoundland southwards to Chesapeake Bay. It is also found in the Baltic Sea. The bass prefers areas with rocky substrates and plenty of shelter, such as reefs, caves and wrecks. It is a demersal fish, meaning that it inhabits the sea floor. The European bass is a highly valued food fish. It is delicious baked, broiled, or fried, and can be cooked in a variety of ways. It is also popular as a smoked fish. The flesh of the European bass is white and flaky, with a mild flavor. The European bass is an important commercial fish, and is farmed in many parts of Europe. It is also popular as a sport fish, and is widely stocked in lakes and ponds for angling. The European bass is a member of the sea bass family (Serranidae). It is closely related to the American black sea bass (Centropristis striata), and the two species are sometimes considered to be subspecies of the same species. Bass fish production in Europe has been on the decline in recent years. This is largely due to overfishing and environmental changes. However, there are still some areas where bass fish production is thriving. The Baltic Sea is one of the most productive areas for bass fish in Europe. This is because the water conditions are ideal for spawning and growth. The Baltic Sea also has a large population of predators, which keep the bass fish population in check. The Mediterranean Sea is another area where bass fish production is doing well. This is due to the warm water conditions and the abundance of food. However, overfishing is a problem in the Mediterranean and this is having a negative impact on bass fish populations. In general, bass fish production in Europe is in decline. However, there are still some areas where the fish are doing well. With proper management and conservation, it is possible for bass fish populations to recover.

In the early 2000s, the European bass was the most popular freshwater fish in the world. It was exported to over 70 countries and its global production reached a peak of over 300,000 tonnes in 2003. However, since then, its popularity has declined sharply due to overfishing and poor management. In 2013, its global production had fallen to just over 100,000 tonnes. The European bass is a member of the perch family and is native to Europe, North Africa, and the Middle East. It is a popular sport fish and is also widely consumed as food. The fish typically grows to a length of 30-60 cm (12-24 inches) and weighs 1-2 kg (2-4 pounds). The European bass is an important commercial species and is farmed in many countries. The largest producers are Greece, Italy, Turkey, and Spain. Fish is also widely consumed in restaurants and households across Europe. Due to overfishing and poor management, the European bass has become endangered in many parts of its range. In 2003, the International Union for Conservation of Nature (IUCN) listed the European bass as "vulnerable" on its Red List of Threatened Species. The species has also been added to Appendix II of the Convention on International Trade in Endangered Species of Wild Fauna and Flora (CITES), which prohibits its trade without proper permits. Despite these measures, the European bass continues to be threatened by overfishing and illegal fishing. In order to protect the species, it is important to implement effective management measures and to raise public awareness about the importance of conserving this valuable fish.