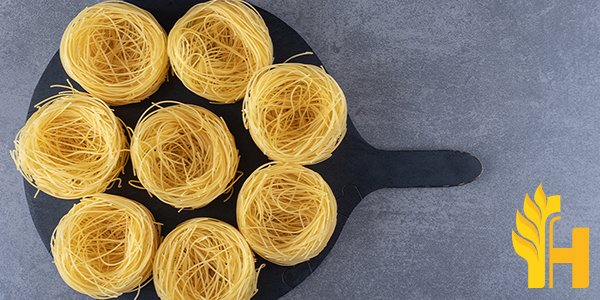 Where to buy and sell Egg Noodle, lowest (cheapest) and highest price.

The Current commodity price of Egg Noodle per kg, pound in the world in the global markets

Egg noodles can be prepared by boiling them in water for a few minutes and then serving. They taste great with many different foods and go well with beef, potato, or chicken dishes. Egg noodles are easy to make at home using ingredients such as salt, boiling water, flour, and eggs. The main ingredients used to make egg noodles are flour, eggs, and salt. Flour is a grain-based foodstuff. Eggs are a common poultry product known for their high protein content. Lastly, salt is a mineral that acts as an electrolyte within the body and helps regulate blood pressure.

Taking these ingredients into consideration, one could infer that egg noodles contain protein from the eggs, carbohydrates from the flour, and electrolytes from the salt. Other ingredients may be included in the recipe including fat, sugar, artificial flavorings, etc., but these are considered to be condiments or additions that do not affect egg noodle nutrition.

One cup of cooked egg noodles contains about 196 calories. About 54% of these calories come from carbohydrates, 18% from protein, and 29% from fat.

Variations in egg noodle recipes may determine the number of micronutrients present. For example, certain renditions of egg noodles may use enriched flour instead of regular flour which would increase the amount of thiamin, niacin, riboflavin, folate, and iron. In addition to this, some brands of flour may be fortified with additional nutrients such as calcium and vitamin D.

Egg noodles can last up to one year if they are stored properly in a dark and dry place. Storage containers made from ceramic, glass, metal, and glazed earthenware can protect the noodles from moisture. In addition to this, egg noodles should be kept away from foods with strong odors so that they do not absorb these flavors.

Egg noodles can also be purchased commercially for those who do not want to make them at home. When using the premade varieties, however, it is important to check the labels on the packaging to ascertain that they are healthy choices. There are often several varieties of egg noodles available at grocery stores including thick and thin varieties. Sometimes they come flavored with different spices like garlic or onion powder, but usually, no additional ingredients are added to them for flavor or nutrition

Egg noodles are a type of pasta made from flour, eggs, and water. They are popular in Asian cuisine, especially in China, Japan, and Korea. There are many different varieties of egg noodle, ranging from the thin vermicelli noodles to the thick udon noodles. Egg noodles can be either fresh or dried, and are often sold in Asian markets. Global production of egg noodles was estimated to be about 9.7 million metric tons in 2013. China is the world's largest producer of egg noodles, accounting for around 60% of global production. Other major producers include Japan, South Korea, and Taiwan. Egg noodles are a versatile food that can be used in a variety of dishes. They can be stir-fried, soup, or served with a sauce. Egg noodles can also be used as an ingredient in other dishes such as dumplings and wontons.