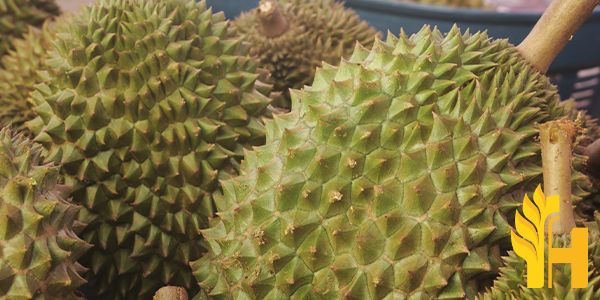 Where to buy and sell Durian, lowest (cheapest) and highest price.

The Current commodity price of Durian per kg, pound in the world in the global markets

Durian is a tropical fruit popular in Southeast Asia when it is commonly referred to as „the king of fruits”. It has got a lot of nutrients compared to other fruits but it has got one flaw, they produce a strong, unpleasant smell that is similar to the rotting meal. It is quite a big fruit characterized by its spiky and outer shell. The shell covers custard-like flesh that hides large seeds inside. The most commonly cultivated cultivar is Durio zibethinus. Its flesh can vary in terms of colors which commonly appear in yellow or white, but sometimes may also be red or green.

It is native to the tropical regions of the world, especially Southeast Asia and countries like Indonesia, Thailand, or Malaysia. The fruit grows up to 30 cm long and 15 cm wide. One ripe fruit contains up to 486 grams of edible pulp.

It is used to prepare various sweet and savory dishes. Both the fruit flesh and seeds are edible. The flesh can be eaten raw, while the seeds require cooking. The taste of this fruit is usually described as a mix of cheese, garlic, caramel, and almonds. It is commonly used to prepare soups, juices, desserts and ice cream, and side dishes. It is also used in traditional medicine, as the fruit has some medicinal properties.

The fruit is an excellent source of nutrients, vitamins, and essential minerals. It contains vitamin C, thiamine, vitamin b6, folate and niacin. It is a great source of manganese, potassium, magnesium, and copper. Durian also contains natural dietary fiber. The nutrients the fruit contains, make durian one of the most nutritious fruits in the world. It also contains a lot of natural antioxidants and healthy plant compounds.

The largest production of durians takes place in Indonesia, where up to 1191750 metric tonnes are produced every year. The largest area where durian is produced is the Indonesian islands of Sumatra and Borneo, making Indonesia the world’s leading producer of this fruit. Due to its strong unpleasant smell, durian is not a common fruit in countries other than Southeast Asian countries.

Durian production is concentrated in Southeast Asia, with Thailand, Malaysia, Indonesia, and Vietnam being the top producers. Together, these four countries account for over 80% of global production. Other significant durian-producing countries include Cambodia, Laos, Bangladesh, Myanmar, India, and the Philippines. The majority of durians produced globally are consumed domestically within the country of origin. However, a significant portion of durian production is also exported to other countries in Southeast Asia, as well as to China, Hong Kong, and Singapore. While durian cultivation has traditionally been small-scale and localized, in recent years there has been an increase in large-scale commercial production of the fruit. This has led to a corresponding increase in durian trade, both within Southeast Asia and internationally. The future of the global durian industry looks promising, with continued growth in production and trade expected in the coming years. This will provide opportunities for durian growers and producers to expand their businesses and tap into new markets.