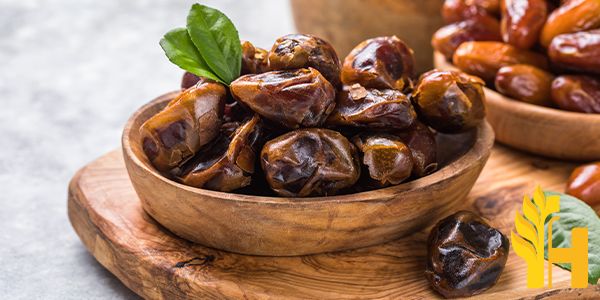 Where to buy and sell Date, lowest (cheapest) and highest price.

The Current commodity price of Date per kg, pound in the world in the global markets

Date, botanically known as Phoenix dactylifera, is a fruit produced by a date palm. It is a type of berry characterized by its yellowish or red-brownish color. The fruit’s meat is soft, quite aromatic, and sweet in taste. The fruit hides a stone inside which is elongate in shape. The stone has a longitudinal furrow. The fruit is usually eaten raw or dry and it's the main source of food for the people of North Africa and the Near East – the places where dates are commonly cultivated and produced.

The dates are nutritional contributions are glucids, fiber, proteins, and lipids. They are a source of food in the diets of the Arabs of the desert. Soft dates are much higher in nutritional value than dried fruit. Fresh dried contains more lipids, fiber, vitamins, minerals, and carbohydrates.

Fruit can be eaten in many different ways. In North America, it is usually an ingredient of sweet dishes and meals. In Arabic countries, it is eaten in salads, served stuffed, crystallized, distilled, or with couscous. In India, dates are used to prepare curry and chutneys. North African people use dates to prepare various cakes and desserts and in the Middle East dates are used to prepare palm wine which is made from the crowns of the date palms. Dry dates can be stored and remain fresh for quite a long time. When stored properly in a dry area, the fruit can be stored for up to several months or even a year. The fresh, soft version can be stored in the fridge for up to two weeks. The fruit should not be stored in places with moisture higher than 75%. Dates are a great source of sugar content, proteins, minerals such as calcium, phosphorus, iron as well as vitamins such as vitamin B and vitamin A.

According to the World Bank, global production of dates reached a record high in 2014, with more than 17 million tonnes produced. The majority of this production came from just three countries: Iran, Pakistan, and Egypt. The date palm is thought to have originated in what is now Iraq, and it has been cultivated for thousands of years. Date palms are very drought-tolerant and can grow in desert conditions. Dates are an important crop in many countries in the Middle East and North Africa, where they are often used as a staple food. In some cultures, dates are also considered to be a symbol of hospitality. The sweetness of dates makes them a popular snack food, and they are often used in desserts and other sweet dishes. Dates can also be dried and preserved for later use. The global production of dates has been increasing in recent years, due to higher demand from both domestic and international markets. The majority of date palm growers are small-scale farmers, and the crop is an important source of income for many households in producing countries. With the growing demand for dates, it is likely that global production will continue to increase in the coming years.