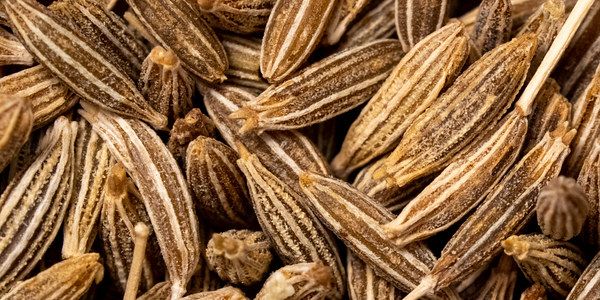 Where to buy and sell Cumin, lowest (cheapest) and highest price.

The Current commodity price of Cumin per kg, pound in the world in the global markets

Cumin (Cuminum cyminum) is a flowering plant in the family Apiaceae, native to a territory including the Middle East and stretching east to India. Its seeds – each one contained within a fruit, which is dried – are used in the cuisines of many different cultures, in both whole and ground form. Cumin is the dried seed of the herb Cuminum cyminum, a member of the parsley family. The cumin plant grows to 30–50 cm (12–20 in) tall and is harvested by hand. It is an annual herbaceous plant, with a slender, glabrous, branched stem that is 20–60 cm (8–24 in) tall. The leaves are 5–10 cm (2–4 in) long and 2–3 mm (0.079–0.118 in) broad and are divided into fine, hair-like segments. The flowers are small, white or pink, and borne in umbels. The fruit is a lateral fusiform or ovoid achene 4–5 mm (0.16–0.20 in) long, containing a single seed. Cumin seeds resemble caraway seeds, being oblong in shape and ridged. They are pale yellow in color, with a bitter taste and a pungent aroma. The main active ingredient in cumin is cumin aldehyde, which gives the spice its characteristic flavor. Cumin also contains a number of other volatile compounds, including cuminaldehyde (4-isopropylbenzaldehyde), 2-methoxy-5-vinylphenol, 3-ethoxy-4-isopropylphenol, and 4-ethenyl-2-methoxyphenol. Cumin has been used as a spice for thousands of years. It is native to the Mediterranean region and is thought to have originated in Egypt. It was mentioned in the Old Testament and was used by the ancient Greeks and Romans. Cumin was brought to Europe by the Moors in the 8th century and became widely used in Spanish and Portuguese cuisine. It is now a common ingredient in the cuisines of North Africa, the Middle East, India, Pakistan, Bangladesh, Sri Lanka, Nepal, Iran, and Mexico. It is commonly used in Middle Eastern, Indian, North African, and Latin American cuisines. In Europe, cumin is often used to flavor savory dishes, such as stews, curries, and soups. It is also used as a spice in certain pickles and pastes. Cumin has been used as a traditional medicine for centuries. It is thought to have digestive, carminative, and diuretic properties. Cumin is also believed to boost the immune system and help fight off infections.

Cumin is a spice made from the dried seeds of an annual plant known as Cuminum cyminum, which is part of the parsley family. The cumin plant grows to 30-50 cm (12-20 in) tall and is harvested by hand. The seeds are used whole or ground into a powder and have a pungent, earthy flavor. Cumin is native to the Mediterranean region and is one of the most widely used spices in the world. It is a key ingredient in cuisines from North Africa, the Middle East, India, and Latin America. In Europe, cumin is often used in savory dishes such as stews and curries. Global production of cumin is thought to be around 500,000 metric tons per year, with India, Syria, and Turkey being the largest producers. Cumin is traded internationally and is available in most supermarkets. Cumin has been used as a spice for centuries and has many health benefits. It is a good source of iron and can help to increase iron absorption. Cumin also has anti-inflammatory and antibacterial properties. If you are looking for a spice to add some flavor to your dishes, cumin is a great option. It is also a healthy choice as it provides many nutrients and has numerous health benefits.