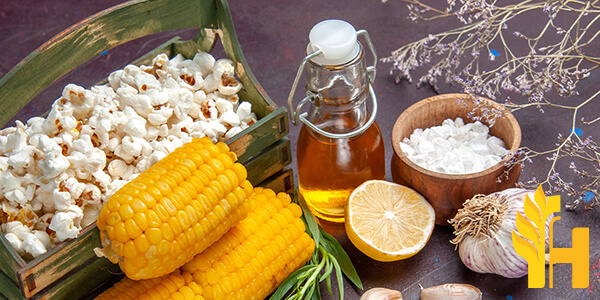 Where to buy and sell Corn Oil, lowest (cheapest) and highest price.

The Current commodity price of Corn Oil per kg, pound in the world in the global markets

The processing of corn oil involves extraction of the fatty portion from the germ, separation, and removal of most impurities. The residual meal after extraction is used as food for livestock or chickens in Europe, but in the United States, its chief use is in the production of commercial feed. The whole seed may also be ground to make a meal.

The oil of the seed is found in the pericarp, or outer coat, and consists chiefly of glycerides of linoleic, palmitic, oleic, stearic, and myristic acids. It also contains more than 25 non-saponifiable substances, among them being lecithin, choline, calcium- and potassium-salts of phosphoric acid, phytosterols, carotenoids, and lecithin. The kernel also contains about 20% protein, including zein (a similar substance to that present in corn flour), glutelin, albumin, and globulins.

The germ portion is composed of approximately 36% protein, mostly zein; 30% carbohydrates in the form of starch; 12% fat (generally in the form of glycerides); 11% lecithin; and 1.5 to 2% mineral matter. The coarser meal, produced in the initial stages of oil extraction, is fit only for use as feed.

The fine meal after removal of the oil by hydraulic presses or other mechanical means contains 75% to 83% protein, including glutelin, albumin, and globulins. It also contains between 12% and 16% carbohydrate (chiefly in the form of starch), between 1% and 2% mineral matter, and about 3% fat. It is ground to make feed meal or into flour for other uses.

Machinery for the large-scale extraction of corn oil was developed by A.J. Bronson in 1866. The oil has a light yellow color and is used chiefly in table frying, although it also goes into soap, paints, varnishes, linoleum, lithographic ink, cooking fat, margarine, salad oils, leather dressings, and linoleum. Other uses of corn oil are as a lubricant, in the manufacture of linoleum, and for illumination. The residue after extraction is sometimes used as covering for flour sacks or mixed with molasses to make cattle feed.