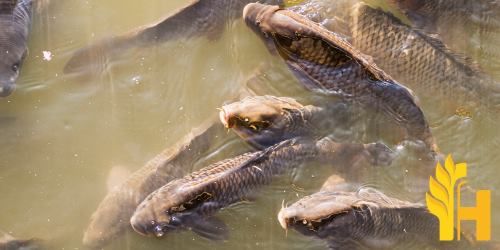 Where to buy and sell Common Carp, lowest (cheapest) and highest price.

European carp is a freshwater fish species native to Europe and Asia. It is also known as the common carp fish. It naturally inhabits the waters of lakes and larger rivers. Nowadays the fish lives all over the world, but native wild species are the most valuable. Due to its destructive nature, common carp is often considered invasive species and has been included in the list of 100 worst invasive species. The fish has been marked as the third most introduced species in the world. It can be found in every country, apart from the poles.

The fish was already known as a farmed species back in Ancient times. Common carp was a food source for Romans. Common carp were found in the inland delta of the Danube River almost 2000 years ago. The species consists of two subspecies – European and Asian, both of them have been domesticated. Common carp were domesticated between the 13th and 16th centuries as food by European monks. By the 12th century, the species had already reached the Rhine delta.

It is commonly used as a source of food and is quite popular in Asian and European varieties of cuisine. Common carp is also used for sport fishing and amateur fishing. The fish is an oily fish what makes it a great source of essential acids, vitamins (especially vitamins A, E, and D) as well as minerals and proteins. Just like other oily fish, carp is a great source of omega-3 acids that prevent cognitive decline, depression, dementia, and overall improve brain functioning. Carp meat contains large amounts of phosphorus, zinc, potassium, magnesium, iodine, selenium, and calcium.

Carp is a common type of freshwater fish that is farmed all over the world. In fact, carp make up the majority of farmed fish in many countries. Carp are relatively easy to farm and they have a high tolerance for poor water quality, making them well-suited for aquaculture. Carp are typically farmed in ponds, although some fish farmers are now experimenting with cage culture in lakes and rivers. Carp is omnivorous and will eat a wide variety of plant and animal matter. This makes them easy to feed in aquaculture settings. The global production of carp has been increasing in recent years, reaching nearly 9 million metric tons in 2018. The vast majority of carp are produced in Asia, with China accounting for the lion’s share of production. Other major producing countries include India, Vietnam, and Indonesia. Carp are an important food fish in many parts of the world. They are typically fried, grilled, or boiled. Carp can also be made into fishcakes or added to soups and stews. While carp are an important food source in many countries, they are also considered to be a nuisance species in others. Carps are known to uproot aquatic plants and stir up sediment, which can degrade water quality. As a result, carp are often the target of conservation efforts aimed at protecting native fish populations.