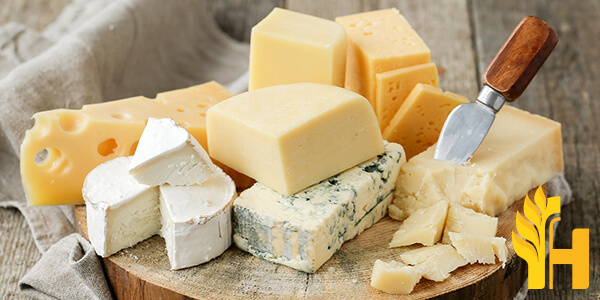 Where to buy and sell Cheese, lowest (cheapest) and highest price.

The Current commodity price of Cheese per kg, pound in the world in the global markets

Cheese (All Kinds) in Afghanistan

Cheese (All Kinds) in Albania

Cheese (All Kinds) in Algeria

Cheese (All Kinds) in Angola

Cheese (All Kinds) in Argentina

Cheese (All Kinds) in Armenia

Cheese (All Kinds) in Australia

Cheese (All Kinds) in Austria

Cheese (All Kinds) in Azerbaijan

Cheese (All Kinds) in Bangladesh

Cheese (All Kinds) in Belarus

Cheese (All Kinds) in Belgium

Cheese is a dairy food made by coagulating milk, mostly that of cows, buffalo, goats, or sheep, during the manufacture of which it develops its characteristic flavor and texture. Most types of cheese are firm-textured when young but become softer as they age. Cheese has been an important ingredient in the diet of people throughout the world.

The word "cheese" comes from Latin caseus which meant "a kind of strong cheese"; however, it is more likely that this was originally an adjective meaning "(made) with pressed curds of sheep's milk".

In Ancient Rome, cheese was a staple food, particularly for the lower classes. It came in many varieties, mostly based on sheep's and goat's milk. Cheese produced in the provinces of Raetia and Noricum were highly prized. This is one of the reasons why the Roman legions were often accompanied by herds of cattle when moving around the empire.

Although cheese was widely eaten, it tended to be very costly and thus was generally only consumed by affluent people. For example, Tacitus wrote that "the more refined guests of the Emperor [Domitian] banish from their tables the cheese course as a tribute to luxury".

There are more than seven hundred different types of cheese produced in the world, but a much smaller number is made in commercially significant quantities. The majority of cheeses eaten today are factory-made, although handmade cheeses continue to be produced on a small scale, particularly by artisan cheese producers.

Many types of cheese can be found all over the world from delicatessens and supermarkets to specialty shops selling only raw milk cheese and small-scale producers. Cheesemakers are also beginning to exchange traditional techniques for intensive, large-scale production in a cooperative movement.

The making of cheese has been practiced since at least 2500 BC when herders in Mesopotamia first drained the milk from partially coagulated curds for preservation purposes. The product obtained from the initial draining is called "qishr" (؂شر) in Arabic and "kashk" or kefir in Iran, Northern India and Russia.

Cheese is a popular food all over the world, and its production has increased significantly in recent years. In 2013, global cheese production reached a record high of 38.5 million metric tons. This represented a 3.4% increase from the previous year. The United States, France, and Germany are the largest cheese-producing countries in the world, accounting for over half of the total global production. Cheese is made from the milk of cows, goats, sheep, or buffalo. The type of cheese that is produced depends on the type of milk that is used. Cow's milk is the most commonly used type of milk for cheese production, but goat's milk and sheep's milk are also used to make some types of cheese. The milk is first pasteurized to kill any harmful bacteria. It is then curdled, and the solid part (the curd) is separated from the liquid (the whey). The curds are then pressed and molded into the desired shape, and the cheese is aged for a period of time to develop its flavor. Cheese is a nutritious food that is high in protein and calcium. It is also a good source of other minerals, such as phosphorus, potassium, and vitamin B12. Cheese can be a part of a healthy diet, but it is also high in fat and sodium. Therefore, it should be consumed in moderation. The global cheese market is expected to continue to grow in the coming years. The growing popularity of cheese, especially in Asia and South America, is expected to drive this growth. In addition, the increasing demand for specialty and artisanal cheeses is also expected to contribute to the growth of the cheese market.