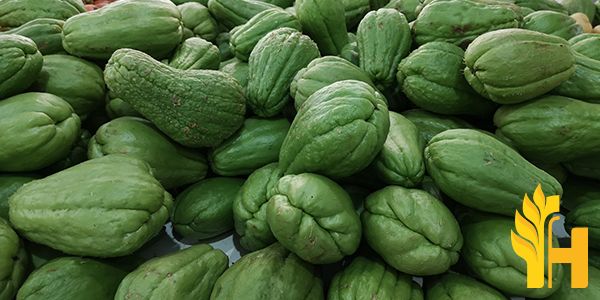 Where to buy and sell Chayote, lowest (cheapest) and highest price.

The Current commodity price of Chayote per kg, pound in the world in the global markets

Chayote is a rather large, highly-branched annual herbaceous vine growing from 2 to 6 meters (6.5–20 ft) long, rooting from the nodes of the stem as it climbs onto or over other plants. The leaves are spirally arranged, broadly ovate with an acuminate tip and a cordate (heart-shaped) base, 5–12 cm long.

The flowers are white with greenish veins, produced in a large compound pseudanthium (a false flower with multiple pistils). The fruit is an ovoid berry 6–12 cm long and 3–5 cm diameter, containing numerous small seeds that resemble the unrelated beans.

Chayote root contains a mucilaginous fiber called zulu gum or chicle, traditionally used in making chewing gum. Chayote has the highest protein content of all the vegetables, roughly four times that of potato and more than twice that of rice or wheat per 100 grams (3.5 oz), providing all essential amino acids required by humans and is a very good source of vitamin C.

Chayote fruit has a light crunchy texture and a delicate flavor that completely differs from the taste of the root bulb, this has to be peeled before eating raw or cooked. The main growing regions for chayote in the world are: Mexico (where it is called "mirliton"), Guatemala, Brazil, the Philippines, Indonesia and Africa.

Chayote is widely used in Central American and Mexican cooking. It may be eaten cooked or raw; in either form, the flesh has a bland flavor and smooth texture (like some cucumbers). The fruit can be fried whole (in batters, like onion rings or tempura) or sliced and fried in slices or strips. It can also be used shredded in stir-fried dishes. In the Philippines, it is usually eaten raw with condiments such as plain salt, bagoong alamang (shrimp paste), vinegar, and soy sauce. In Vietnam, it is used to make a salad similar to the Chinese water chestnut salad. In Brazil, it's often boiled in soups, fried with eggs and/or squash, grated on a "bobó de camarão" or as a base of a cold soup. In Belize, El Salvador, and Guatemala chayote is added to "pupusas". In Ghana, it is commonly used to make "kontomire", a spicy stewed leaf vegetable. In the Philippines, there are many dishes involving chayote. Chayote can be stuffed with shrimp or pork then baked in butter and cream sauce. The fruit is also made into soups, pickled by itself or with carrots and green papaya, or used in stir-fried dishes.

Chayote (Sechium edule) is a pear-shaped fruit that belongs to the gourd family. Chayote is native to Mexico but it is now grown in many parts of the world including the United States, South America, and Asia. The chayote plant is a climbing vine that can grow up to 20 feet (6 meters) in length. The chayote fruit is usually green but it can also be white, yellow, or brown. Chayote is often eaten raw, cooked, or pickled. Chayote is a popular vegetable in many parts of the world. In 2013, global production of chayote was estimated to be 1.9 million metric tons. The majority of chayote production takes place in Asia, with China being the largest producer. Other major producers of chayote include Mexico, Peru, and Brazil. The United States is a major importer of chayote, with the vast majority of imports coming from Mexico. Chayote is widely available in supermarkets and grocery stores in the United States. Chayote can also be purchased from online retailers. The global chayote market is expected to continue growing in the coming years. Increasing demand for healthy and convenient food options is a major factor driving market growth. Chayote is low in calories and fat, and it is a good source of vitamins and minerals. Chayote is also easy to prepare, making it a convenient option for busy consumers. The increasing popularity of chayote in Asia is another factor driving market growth. Chayote is becoming increasingly popular as a stir-fry ingredient in China and other Asian countries. Chayote cultivation is also expanding to new areas in Asia, such as India and Thailand. Global production of chayote is expected to reach 2.5 million metric tons by 2025. Increases in population and income levels are expected to drive market growth over the forecast period. Chayote is unlikely to face significant competition from other vegetables in the coming years, making it a promising crop for producers. Chayote cultivation takes place in tropical and subtropical regions of the world. The plant prefers warm weather and it requires a lot of moisture to grow. Chayote can be grown in a variety of soils but it prefers well-drained, sandy soils. Chayote is typically propagated from seeds but it can also be propagated from cuttings. Chayote plants are usually grown in home gardens or on small farms. Commercial production of chayote is typically done by larger scale farmers and agribusinesses. Chayote cultivation requires a significant amount of labor, making it a relatively expensive vegetable to produce. The harvesting of chayote fruits is typically done by hand. Chayote fruits are harvested when they are fully mature but before they start to rot. Chayote fruits that are damaged or overripe are not suitable for consumption and they are often used as animal feed. After harvest, chayote fruits are usually washed and then they are typically eaten raw, cooked, or pickled. Chayote can be stored for several months if it is properly refrigerated. Chayote that is not consumed fresh is often canned, frozen, or dried.

Chayote (Sechium edule) is a tropical fruit that belongs to the gourd family. Chayotes are typically pear-shaped, with smooth or prickly green skin and white flesh. Chayotes are often eaten raw, cooked, or pickled. Chayote plants are fast-growing vines that can reach up to 20 feet in length. Chayotes are native to Mexico and Central America, but they are now grown in many tropical and subtropical regions around the world. Chayotes are a good source of vitamins C and B6, as well as potassium and fiber. Chayotes are low in calories and fat, making them a healthy addition to any diet. Chayote plants are easy to grow at home. Chayotes can be planted in the ground or in containers. Chayotes prefer warm, humid climates, but they will also grow in cooler, dryer conditions. Chayotes need plenty of water and full sun to thrive. Chayote plants can be propagated from seed or from rooted cuttings. Chayotes are not frost-tolerant, so they should be planted after all danger of frost has passed. Chayotes can be harvested after the vines have grown for 3-4 months. Chayote fruits can be stored in a cool, dry place for up to 2 weeks.

China is the top producer of chayote, followed by Mexico and Guatemala. Other major producers include Peru, Honduras, and the Philippines. In 2018, global production of chayote was estimated to be around 3.7 million metric tons. The majority of this production takes place in Asia, with China accounting for over 60% of the total. Other major producers in the region include Mexico, India, and Thailand. The top five producing countries – China, Mexico, Guatemala, Peru, and Honduras – account for around 80% of global production. Together, these countries produce over three million metric tons of chayote each year. Chayote is a tropical vegetable that is related to squash and melons. It is typically green in color, but can also be white, yellow, or purple. The vegetable is popular in many Latin American countries, as well as in Asia and Africa. Chayote can be eaten raw or cooked. It is often used in soups and stews, or it can be boiled and served as a side dish. The vegetable is a good source of vitamins and minerals, including vitamin C, potassium, and manganese.