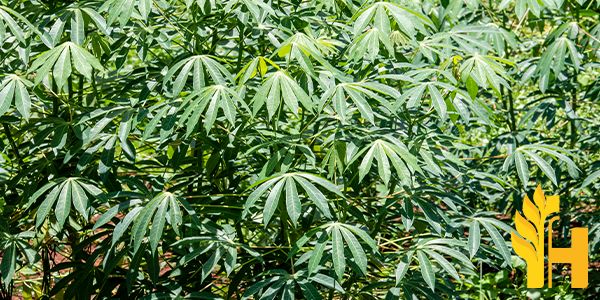 Where to buy and sell Cassava, lowest (cheapest) and highest price.

The Current commodity price of Cassava per kg, pound in the world in the global markets

tapioca (out of state)

Cassava in Antigua and Barbuda

The cassava plant is a herbaceous perennial, with a small shrubby habit, growing 1 to 1.5 m tall and 90 cm across. The leaves of the cassava are 10-20cm long and 5–12cm broad, palmately 7–9 lobed with 3-7 triangular lobes on each side of the midrib, tapering to a long tip.

The flowers are produced in simple or paniculate cymes growing from the leaf axils. The flower stalks (pedicels) are 8–20cm long, and each flower is in diameter with five creamy white petals with a greenish-yellow center and 19–32 spirally arranged stamens. The fruit is a pear-shaped (pyriform) or ovoid berry 6–12cm long, containing several brown seeds shaped like lima beans. The tubers are mostly smooth and cylindrical, but some cultivars develop lobes (swollen stolons). Some have both secondary and tertiary roots.

Cassava tuberous roots are disk-shaped or elongated. They vary in size from that of a small potato to over 60 cm long and weighing several kilograms. The root is extensively branched, fleshy, and brittle—it breaks easily when pulled out of the ground. Each plant carries up to 75 tubers, which are filled with starch and have thick, bark-like, brown skins.

Magnification of cassava tubers shows that their skin is composed of cells made up of cellulose cell walls thickened slightly by deposits of calcium oxalate crystals called raphides. These are crystal-shaped granules that do not contain starch grains but have needle-like projections that support the walls.

On average cassava roots contain about 24 percent starch by weight, but this can vary from 20-40%. The remainder of the root is made up largely of water (75%) and indigestible cellulose, which serves as a dietary fiber. These two components give raw cassavas a typical bulk density between 0.89 and 1.1 g/cm3.

The dried root powder is about 35% starch by weight, 75% of which is amylopectin and 25% amylose. Cassava roots produce a sweet exudate from their root hairs. Their color varies from pale brown to white depending on the cultivar.

When mature, cassava roots are naturally rich in starch and low in moisture (4-8%), an ideal storage root that can be left in the ground during seasons when it is not economically productive to harvest them. Compared with sweet potato, cassava contains only 1% water, has a much higher tuber yield per unit area, takes less time to grow, and has higher dry matter yields per unit time.

Cassava is propagated using stem cuttings or by adventitious plantlets formed on the phyllodes of the parent plant, both of which form roots upon contact with soil. These methods give rise to high initial variability in early yields so farmers must be sure of the quality and disease resistance of their planting material.

Cassava is a major food crop in many developing countries. It is a starchy root vegetable that is an important source of calories and nutrients for millions of people worldwide. Cassava production has increased steadily over the past few decades, reaching a record high of 193 million tonnes in 2014. This rise in production is largely due to increases in yield, as the area planted with cassava has remained relatively stable. The majority of cassava is grown in Africa, where it is a major food crop for over 200 million people. Brazil is the second largest producer of cassava, followed by Thailand, Nigeria, and Indonesia. Other important producing countries include Colombia, India, Vietnam, and Mozambique. Cassava is a versatile crop that can be grown in a wide variety of climates and soils. It is drought-tolerant and can be grown on marginal lands that are not suitable for other crops. This makes it an important crop for smallholder farmers, who often have limited land resources. Cassava is mainly eaten as a starchy root vegetable, but it can also be made into flour, chips, or pellets. It is a major ingredient in many traditional dishes, such as fufu, garri, and tapioca pudding. The demand for cassava products is growing, both within Africa and in other parts of the world. This growth is being driven by population growth, urbanization, and the rise of the middle class in developing countries. As incomes increase, people are able to buy more diverse and nutritious diets, which include cassava-based products. The global production of cassava is forecast to continue growing in the coming years, reaching 220 million tonnes by 2025. This growth will be driven by increases in yield and the area planted, as well as continued population growth and urbanization.