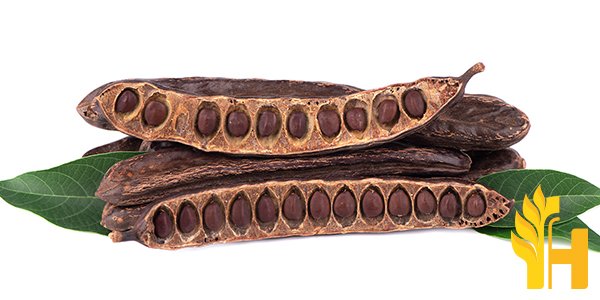 Where to buy and sell Carob, lowest (cheapest) and highest price.

The Current commodity price of Carob per kg, pound in the world in the global markets

The carob plant (Ceratonia siliqua) is an evergreen shrub or small tree in the legume family, Fabaceae. It is widely cultivated for its edible pods, which are used as a chocolate substitute, and as an animal feed. The carob tree grows to 5–12 m tall. The leaves are 10–25 cm long, pinnate with 6–12 pairs of leaflets, each leaflet 3–6 cm long and 2–3 cm broad. The flowers are small, pea-like, and yellow-green, produced in clusters of ones or twos in the axils of the leaves; they are pollinated by bees. The fruit is a legume, 30–50 cm long and 1.5–3 cm broad, containing several seeds; in most cases it is 3-lobed, but occasionally it can be 2- or 4-lobed as a result of incomplete fission of the seed. It ripens to brown or blackish brown. Carob trees are native to the Mediterranean region, from Morocco and Portugal in the west to Cyprus and Lebanon in the east. Ceratonia siliqua has a long history of cultivation; it was grown commercially in Sicily as early as 1500 BCE, and it is still an important crop in Southern Italy. The tree is also cultivated throughout the Mediterranean region, in North Africa, the Canary Islands, and Arabia. It is also naturalized in tropical and subtropical regions around the world, including parts of Australia, Southern China, India, Pakistan, Southeast Asia, and the Caribbean. The carob plant is drought-tolerant and can survive on marginal land. It can also fix nitrogen in the soil to improve fertility. The leaves are used as fodder, and the wood can be used for fuel or charcoal. The pods of the carob tree have been used as food for centuries. The seeds are ground up and used as a substitute for cocoa powder. The pulp of the pods can be eaten fresh or dried and used as a sweetener. Carob syrup is made from the pulp of the pods and is used as a molasses or honey substitute. The carob plant has many medicinal properties. The leaves are used to make a tea that is believed to be helpful in treating diarrhea, indigestion, and urinary tract infections. The seeds are ground up and made into a powder that is used to treat stomach ulcers. Carob powder is also used as a laxative. The leaves and pods of the carob tree are also used to make a poultice that is believed to be helpful in treating wounds and skin infections. The carob plant has a number of different uses. It can be used as food, medicine, or even animal feed. The carob plant is a valuable asset to any region where it is grown.

Carob production is concentrated in the Mediterranean Basin, with Spain and Morocco being the largest producers. Global carob production was estimated at 208,000 tonnes in 2013. Carob trees are believed to have originated in the eastern Mediterranean region and have been cultivated for centuries. The tree is now grown in many parts of the world, including Spain, Morocco, Portugal, Italy, Greece, Algeria, Tunisia, Syria, Lebanon, Israel, Cyprus, Turkey, Egypt, and Libya. In recent years, carob production has been increasing in many countries due to the growing demand for the product. Carob is used in a variety of food products, including chocolate and confectionery, as well as in natural health products. The majority of carob produced is used in the food industry, with around 80% being used in chocolate and confectionery products. Carob powder is also used as a natural sweetener and flavoring agent in a variety of foods and beverages. Carob production is forecast to continue to grow in the coming years, driven by the increasing demand for natural and healthy food ingredients.