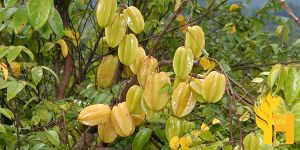 Where to buy and sell Carambola, lowest (cheapest) and highest price.

The Current commodity price of Carambola per kg, pound in the world in the global markets

The carambola is a small tree. 5 to 12 m high, with a short trunk. It is quite attractive and ornamental, with pale green leaves. The flowers are gathered in clusters. This tree needs a tropical or subtropical climate, with quite humid weather.

The carambola is a tropical fruit that has recently started its trade in Europe. It is also called the star fruit because it is star-shaped when cut on a cross-section. It has a thin edible skin, of pale yellow color that turns into golden yellow when the fruit is ripe. It has a translucent, crispy, and acid pulp.

Fresh it is used to be eaten as such, or in salads, fruit salads, and juices. But nowadays is used mainly for processing, since its chemical composition makes it a good vitamin C concentrate if boiled with sugar, and it is an excellent source of pectin when boiled with water.

The fruit is ready to be eaten once it becomes golden yellow and the seeds are dark brown. The pulp should also be translucent and crispy, not mealy or mushy. Seeds: There are not many seeds in a fruit, but since they are large and flat, the presence of even one or two is noticeable. They should be dark brown and not injured.

The carambola is a fruit that is grown for its taste and smell as much as for its appearance, which makes it very appreciated by those who eat it. The smell of the ripe fruit is intense and pleasant, but fresh carambolas do have not much smell at all.

Its flesh is soft and crispy, translucent and acid. It is usually eaten as such, but the pulp is now used mainly for processing, as it has great vitamin C concentrate potential as well as pectin if boiled with sugar.

Carambola production is a major global industry. Top producers of carambola in the world market include Australia, Guyana, India, Israel, Malaysia, the Philippines, Taiwan, and the United States. In the United States, Carambola plants are grown in tropical and semitropical areas, including parts of Florida and Hawaii. Carambola trees in the United States are a popular landscape tree for home gardens and parks.