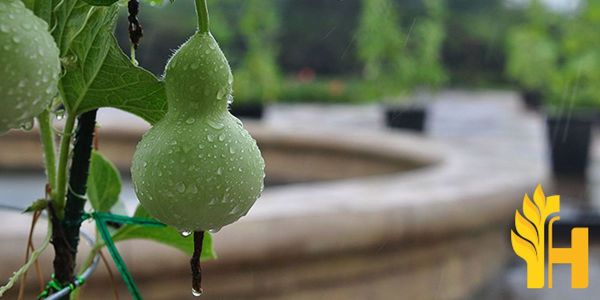 Where to buy and sell Calabash, lowest (cheapest) and highest price.

The Current commodity price of Calabash per kg, pound in the world in the global markets

The calabash tree is native to the American tropics. Its flowers have five petals fused in a funnel shape; they are light green in color with purple streaks. The fruit’s shell encloses a whitish pulp and thin dark brown seeds. The tree may flower and fruit at any time of the year. The calabash tree is significant because its shell can be used for bowls and containers. It also has medicinal uses.

It is frequently planted in home gardens to shade houses, or in commercial plantations. Seeds are used in the tropics as water scoops to collect drinking water from wells without contamination. The fruit's pulp is also used as feed for livestock. The calabash tree is of little use to the timber industry. However, its wood has been used in the past for making furniture and utensils such as plates and bowls. It also yields a strong fiber used in rope and twine. The tree is cultivated for shade in coffee plantations.

The calabash tree will grow in areas with rainfall between 500-2000mm per year and can be grown at altitudes up to 2000m above sea level. It needs full sun and well-drained soil. It is not a heavy feeder and usually doesn't need fertilizer.

It is propagated by seed or using pieces of roots called cuttings. In Africa, it has been used to control soil erosion on banks of rivers, in shelter belts, and as shade for coffee plants. The pulp from the fruit is rich in vitamin C and may be used as a dietary supplement or to make various drinks. The seeds may be roasted and eaten.

The tree has been introduced into many tropical countries of the world, e.g., India, Malaysia, Brazil, Venezuela, Colombia, and the West Indies. It is grown mainly for its fruit but also for fiber production because the fruits are cut before they are ripe and dried to make a fiber called sisal. Sisal is used for making twines, rope, and cloth.

The calabash tree produces a fruit that is large, light green, and roundish in shape. When the fruit is cut open it reveals a tough, white lining. The seeds are enclosed in a fibrous mass. Between the outer portion of the lining and the tough woody layers just below it, there were found substances that showed pharmacological activity. Among these was a saponin that became known as the "to saponin" of crescentia . It is a mixture of two glycosides, cujavins A and B.

Calabash tree bark yields a number of alkaloids having physiological activity: an alkaloid with antipyretic properties, an alkaloid that stimulates respiration, and a mixture of large neutral amino acids. A yellow coloring principle has also been reported.

Crescentin is one of the inactive constituents present in the crescentia . It is composed of glucose units linked by beta bonds with rhamnose units attached via alpha linkages.

Calabash is an important food crop in many parts of the world. It is a member of the gourd family, which also includes cucumbers, melons, and squash. The calabash is native to Africa, where it has been cultivated for thousands of years. Today, calabashes are grown in many parts of the world, including Africa, Asia, and South America. The largest producers of calabashes are China and India. In China, calabashes are used to make a variety of items, including bowls, cups, and utensils. In India, they are often used as containers for storing water or milk. Calabashes are also popular in the Caribbean, where they are used to make drums. The shells of the calabash can be carved into beautiful works of art. The calabash is a versatile crop that can be used in many different ways. It is an important food source for many people around the world.