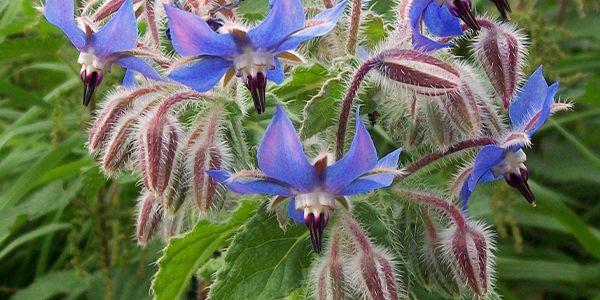 Where to buy and sell Borage, lowest (cheapest) and highest price.

The Current commodity price of Borage per kg, pound in the world in the global markets

Borage is an annual herb that produces blue or purple flowers. The leaves and stems of the plant are covered in tiny, sharp spines. The flowers have a sweet, honey-like taste and are often used to make tea. Borage is native to the Mediterranean region and has been naturalized to other parts of the world, including North America. The plant grows to a height of about two feet and has a hairy, spiny appearance. The leaves are oblong and have toothed edges. The flowers are tubular and range in color from blue to purple. Borage blooms from June to September. The plant is easily grown from seed and does not require much care. It prefers full sun but will tolerate some shade. Borage is tolerant of most soil types but prefers well-drained soil. The plant self-seeds readily and can become invasive in some areas. Borage has a number of traditional uses. The leaves can be used fresh or dried in salads or as a garnish. The flowers can be used to make tea or added to salads. The leaves and stems can be cooked and used as spinach-like vegetables. Borage is also sometimes used as herbal medicine. Borage is considered a cooling herb and is often used to treat fever, inflammation, and respiratory infections. It is also used to promote lactation, relieve anxiety, and improve digestion. Borage oil is sometimes used as a natural treatment for skin conditions like eczema and psoriasis. According to a report by the United States Department of Agriculture's Foreign Agricultural Service, borage production worldwide was estimated at about 462,000 metric tons in 2013. The top five producing countries were Morocco (180,000 metric tons), Sudan (106,000 metric tons), Russia (82,000 metric tons), China (56,000 metric tons), and Turkey (27,000 metric tons). In addition to being used as a food source, borage is also used for its oil, which is high in gamma-linolenic acid (GLA). GLA is an essential fatty acid that has been shown to have anti-inflammatory and other health benefits. Borage oil is used in dietary supplements, skin care products, and as an ingredient in some cooking oils. Borage is a hardy plant that can be grown in a variety of climates. It prefers full sun and well-drained soil but will tolerate some shade and poor soils. Borage is typically direct-seeded, but can also be started indoors and transplanted outdoors later. The plant will self-seed readily, so deadheading (removing spent flowers) is recommended if you do not want it to spread too aggressively.

The global production of borage fish has been on the rise in recent years. In 2013, the world's borage fish production reached a record high of 8.5 million metric tons. This was an increase of 2.5 million metric tons from the previous year. The majority of this increase came from China, which is now the world's largest producer of borage fish. Other major producers include the United States, Japan, and South Korea. The increasing demand for borage fish is due to a variety of factors. First, fish is a relatively new addition to the global seafood market. In the past, most borage fish were caught for bait or used as food for livestock. However, as fish has become more popular with consumers, the demand for it has grown. Additionally, borage fish is a healthy and sustainable seafood option. The fish is high in protein and low in mercury, making it an attractive choice for those looking for a nutritious meal. With the global production of borage fish on the rise, it is important to ensure that the fish are properly managed. Overfishing and pollution are two major threats to the borage fish population. If not carefully monitored, these threats could lead to a decline in the world's borage fish supply.