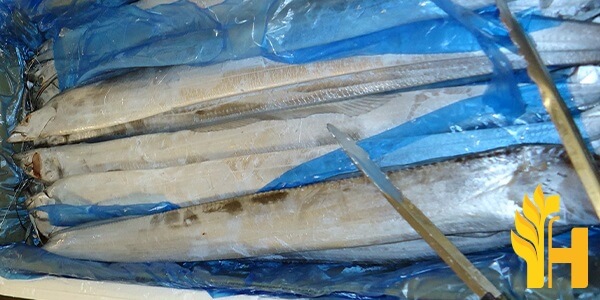 Where to buy and sell Beltfish, lowest (cheapest) and highest price.

Belt fish is also known under several common names such as Silver Scabbardfish, Frostfish, Cutlassfish. It is one of the most important industrial fish species in the world. It is not quite a popular source of food in the United States and Europe but it is quite common for various Asian cuisines.

The fish is characterized by its firm and tight meat when it is raw. It is quite easy to prepare as it requires low skills and can be steamed, cooked, boiled, fried, or baked. The meat becomes very tender when cooked. It is very often server fried or grilled. The soft meat is similar in texture to mackerel with a quite significant, characteristic fishy taste. The fish despite its strong flavor has not got an unpleasant smell.

Belt fish is quite characteristic in terms of appearance. It looks like a ribbon with a sharp and pointed head. It is shiny and silver in color and is long and slender. The largest species can measure up to six feet in length but on average the fish reaches two to three feet. It can weigh up to 5 kilograms. Its natural habitats are deep water of major oceans and are commonly fished in coastal waters. This species is quite common in Asian markets. It can be found both raw as a whole on ice or cut into sections and then frozen. Fish is an important ingredient in many Asian dishes. In China, it is usually served fried on a pan or served in a spicy stew. In Japan, the fish is served raw in form of sashimi.

The fish does not contain lots of important nutrients but it is quite a good source of omega 3. It is also a great source of proteins and vitamins of group B. It contains large amounts of important minerals such as sodium. It is quite a calorie-dense type of fish as it contains 250 calories in a portion of 100-gram.

The largest catches of this species take place in Taiwan and China as well as Japan, South Korea, and Pakistan. Up to 1.3 million metric tons are caught each year. The fish is also caught in several different countries on a smaller scale. The countries that take part in catching are Angola, Nigeria, Morocco, Brazil, Mexico, India, the USA, and Iran.

Beltfish are an important food source in many parts of the world. They are caught both commercially and for subsistence. According to the Food and Agriculture Organization (FAO), the global production of beltfish was 481,000 tonnes in 2012. The majority of beltfish are caught in Asia, with China being the largest producer. Other major producing countries include India, Indonesia, and Vietnam. The FAO also reports that the global production of beltfish has been steadily increasing in recent years, reaching a record high of 481,000 tonnes in 2012. This increase is largely due to the growing demand for beltfish in Asia. In particular, China's demand for beltfish has grown significantly in recent years. Beltfish are versatile fish that can be used in a variety of dishes. They are commonly used in soups and stews, as well as being fried or grilled. Beltfish are also popular in sushi and sashimi. The growing demand for beltfish has led to an increase in fishing pressure on beltfish stocks. As a result, many beltfish stocks are now overfished. In order to ensure the long-term sustainability of beltfish stocks, it is important to fish them in a sustainable way. This means fishing them at a rate that allows them to replenish their numbers. Beltfish are an important food source for many people around the world. It is therefore important to ensure that they are fished sustainably so that they can continue to provide for those who depend on them.