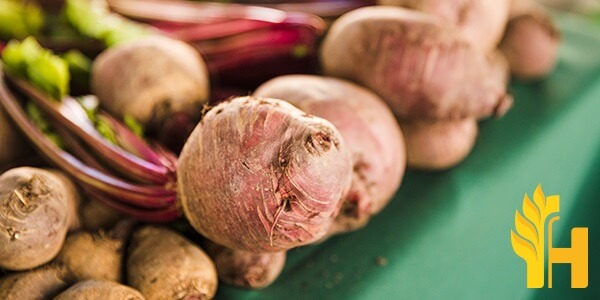 Where to buy and sell Beetroot, lowest (cheapest) and highest price.

The Current commodity price of Beetroot per kg, pound in the world in the global markets

beetroot (out of state)

Beetroot is a biennial plant that belongs to the Chenopodiaceae family. It forms rosettes of leaves that are oval, smooth with winding margins. During the first year, beetroot also forms a hypocotyls tuber which is the edible part. The tuber is usually rounded, elongate, or flat-topped. It has a color similar to radish. A sugar variety of beetroot contains sugar in the concentric layers which correspond with the vascular and parenchyma reserve tissue. In the second year, a flower stem occurs. The flowers are yellowish-green and tend to appear in a group of 2 to 6 flowers. The plant is usually wind-pollinated.

It is a large and fleshy root vegetable eaten as a vegetable. It has thin, smooth skin that can occur in a wide range of colors. Its flesh has a sweet taste and is usually dark red, crimson, or even purple flesh. Beetroot is a great source of many beneficial nutrients such as fiber and carbohydrates. It is also an excellent source of minerals such as potassium, iron, calcium, sodium, and phosphorus. Beetroot also contains a variety of important vitamins, especially vitamin C, A, and niacin.

There are three main varieties of this plant; the common, red one eaten as a vegetable, the sugar one, and the mangelwurzel. Sugar beetroot is white in color and is cultivated mostly in order to obtain sugar. Beetroot sugar was developed in the 17th century. The mangelwurzel variety is commonly cultivated as cattle food.

Beetroot is an ingredient used in several dishes and salads. It can be eaten fresh, cooked, boiled, fried, or baked. Once cooked it can be preserved in sugar or vinegar (pickled). The pickled vegetable is used to obtain beetroot wine and to prepare various kinds of sauces such as a spicy hot sauce. The beetroot is also used as an industrial plant and used to obtain betacyanin, a natural pigment. It is used in food industries to add reddish tones to various kinds of food products. Beetroot cooking may be tough and requires patience because the vegetable requires a long boiling time.

The largest producer of beetroot in the world is Russia. Russian Federation specializes in the production of sugar beetroot. Up to 51366830 tons of raw vegetable is produced there yearly. Russia is followed by France (33794906 tons per year) and the USA (33457880 tons annually). Poland is the 5th world’s biggest beetroot producer.

According to the latest data from the Food and Agriculture Organization of the United Nations (FAO), global production of beetroot reached 19.7 million tonnes in 2016. This was a significant increase from the 15.5 million tonnes produced in 2015. The majority of this increase is due to increased production in Europe, which accounted for over 80% of the global total in 2016. Global production of beetroot is expected to continue to increase in the coming years, driven by continued demand from Europe and other major markets such as the United States. The FAO forecasts that global production will reach 21.6 million tonnes by 2020. This growth is likely to be driven by increased plantings and improved yields in major producing countries. In terms of individual countries, Russia is the largest producer of beetroot in the world, with a production level of 4.9 million tonnes in 2016. This was followed by Ukraine (3.5 million tonnes) and Poland (2.1 million tonnes). Together, these three countries accounted for over 60% of global production in 2016. Other major beetroot-producing countries include the United States, Germany, France, and the United Kingdom. Together, these four countries accounted for a further 20% of global production in 2016. The vast majority of beetroot that is produced globally is used for human consumption. This includes both fresh consumptions and processing into products such as juices, soups, and pickled beetroot. A small percentage of global production is used for animal feed, while a very small amount is used for industrial purposes such as the production of sugar. Beetroot is a versatile vegetable that can be used in a wide range of dishes. It is popular in salads and as a side dish, but can also be used in main dishes and as an ingredient in soups and stews. Its sweet taste means that it is often used as a dessert ingredient, for example in cakes and pies. The health benefits of beetroot are well-documented. Beetroot is a good source of vitamins and minerals, including iron, magnesium, potassium, and vitamin C. It is also a good source of dietary fiber and antioxidants. These nutrients make beetroot an excellent food for helping to maintain a healthy heart and blood pressure. Additionally, the high levels of nitrates found in beetroot can help to improve athletic performance. The global production of beetroot has increased significantly in recent years, driven by continued demand from major markets. This trend is expected to continue in the coming years, with the FAO forecasting that global production will reach 21.6 million tonnes by 2020. Beetroot is a versatile and healthy vegetable that can be used in a wide range of dishes. Its sweet taste and health benefits make it an increasingly popular ingredient in both savory and sweet dishes.