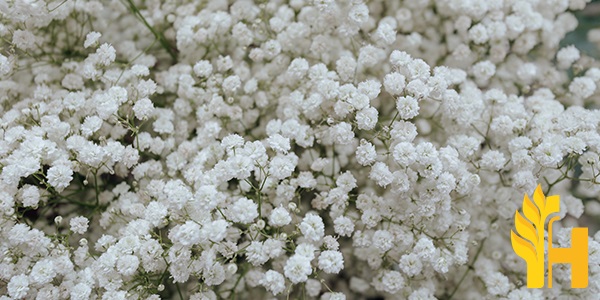 Where to buy and sell Baby's Breath, lowest (cheapest) and highest price.

Baby’s breath is also known as Gypsophila paniculata. It is a perennial or annual plant native to Australia, Africa, the Pacific Islands, Eurasia. The plant is extremely popular in Turkey which has a high diversity of gypsophila, up to 35 endemic species. The name is derived from a Greek word meaning loving gypsum. It is a reference to the soil rich in gypsum which is preferred by the plant.

Gypsophilia is an herb that can grow up to 1 meter tall. It is characterized by its thick, deep, tap rood and stems with lots of branches. Its leaves are cauline with bases and are quire small up to 9 cm in length. The plant is well known for its petite flowers that are only 1-3 mm big. The petals are mostly white, but some species create pinkish or purplish ones. The plant blooms from summer to fall. The flowers turn into spherical or oblong fruit with several seeds inside. The seeds are black in a bean-like shape.

It is not a very demanding plant and can be easily cultivated in home gardens. Gypsophilia likes sunny places and alkaline soil. It does not require intensive watering and grows best in well-draining soils. It can be grown both from seeds or cuttings. Baby’s breath is quite resistant to diseases and pests but should be protected against snails and slugs. It should not be watered directly in order to avoid fungal problems.

The flower is mainly cultivated for its ornamental purposes. It can be used as a decoration of a garden, or cut and then dried and used in flower arrangements by florists. It is a well-known decoration of weddings and other events because the cut flowers are quite resistant to changes and perform well in difficult conditions. They are also very well preserved when dried. Planting gypsophila in one’s garden may be a good idea for everyone who would like to make some money from their gardens. Simply plant baby’s breath, and when your plant will be in a blossoming season, cut its pristine white flowers to supply your local florist or dry them and save for colder days when fresh-cut flowers may be really hard to find.