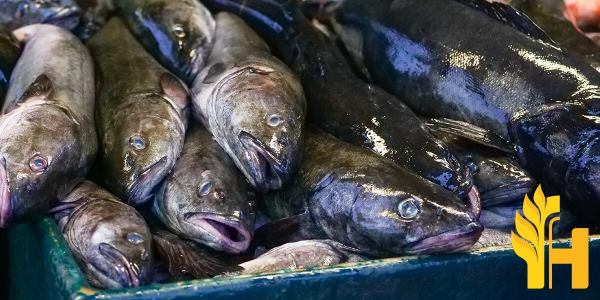 The title of the most popular fish in the Western World undeniably belongs to Atlantic cod, also known as Gadus morhua. It is characterized by their hairlike structure that hangs from their chin. The structure is also called a barbel. The fish has two anal fins, a broom-shaped tail, and three dorsal fins. Atlantic cod can weigh up to 94 kg and measure up to 200 cm in length. The life span of this species reaches almost 25 years. It is brown, green, or gray and its skin is covered with small, smooth scales. Atlantic cod is closely related to Pollock and haddock. All of them belong to the Gadidae family.

The fish naturally occurs in the regions from Greenland to North Carolina. It prefers shallow waters and lives close to the ocean bottom. Usually, it can be found in less than 500 feet deep waters. Due to extensive fishing, Atlantic cod is listed on the IUCN Red List. However, commercial and recreational fishing is still conducted on a large scale.

Atlantic cod is characterized by its flaky, white meat which is mild in flavor. It is a rich source of protein, vitamin B and important for the body minerals. It provides the body with phosphorus and selenium. Phosphorus is an essential element to keep one’s bones and teeth healthy and it plays an important role in the proper assimilation of various vitamins. Selenium is important in case of the DNA protection. Atlantic cod is lower in omega-3s than more fatty fish, but still provides the body with these important elements.

There are many ways to prepare the fish, such as cooking, baking, grilling, broiling, or frying. The fish is quite easy to overcook what leads to its drying, that’s why it is highly recommended to use moist heat to avoid drying the meat. The fish should be wrapped in aluminum foil before cooking. It tastes great with olive oil, pepper, a pinch of salt, fresh garlic, and some lemon juice.

Catches of Atlantic cod catches have significantly increased in the previous years. The share of the Atlantic cod catches in the world catches has been established as 1.2%. The largest producers and catches by tons are Norway (374000 tons), Russia (345000 tons), and Iceland (275000). Due to huge demand, Atlantic Cod is also cultivated in captivity. The largest aquaculture of this species takes place in Norway and Iceland.