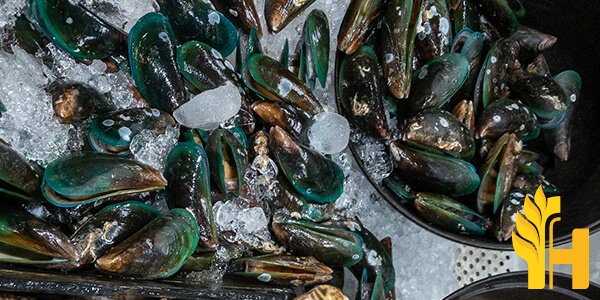 Where to buy and sell Asian Green Mussel, lowest (cheapest) and highest price.

The Current commodity price of Asian Green Mussel per kg, pound in the world in the global markets

The Asian green mussel is native to the south-western Pacific Ocean. It was first identified in 1962 at Sydney Harbour in Australia.

They attach themselves with thread-like byssus filaments to hard surfaces, where they are well camouflaged against predators that cannot enter the shell aperture or prise them from their moorings. They have been reported widely in the Atlantic and Pacific Oceans,

They have high growth rates and long-lived planktonic larvae that are widely distributed by currents. The larvae settle preferentially on hard surfaces, where they attach with byssus threads. They form dense populations, up to 35,000 individuals per square meter on a variety of hard marine structures.

The biology of the mussel has been the focus of many studies, with over 10,000 scientific reference articles published on them. They are widespread in distribution due to their fast growth rates, longevity, and lack of known predators outside their native range.

The mussel has long been considered a pest species worldwide but is especially prominent in Hawaii. It was first found there in 1993 and has since reached densities of 30,000 per square meter.

The mussels are completely protected by their shells (1-2 cm thick) and do not feed as adults; they rely on food reserves during larval development. Such high densities result in significant changes to nearshore communities where the mussel is present; there is very little macroalgal growth, few native invertebrates, and low species diversity.

The mussels also provide a habitat for small fish that feed on their mucous and larvae; these in turn are consumed by larger fishes that prey on the small fish populations. On reefs where there has been mussel infestation, sea urchins have multiplied and consumed large amounts of algae.

As of 2016, the global production of Asian green mussels was estimated to be 1.3 million tonnes. The top-producing countries include China, India, and Thailand. Asian green mussels are a popular seafood item in many parts of Asia. They are often consumed steamed, grilled, or stir-fried. In recent years, the demand for mussels has been increasing in other parts of the world as well. The main drivers of this increased demand are the mussel's high protein content and its relatively low cost. Asian green mussels are a good source of vitamins and minerals, including iron, calcium, and zinc. Additionally, they are a rich source of omega-3 fatty acids, which are beneficial for heart health. As the global demand for mussels continues to grow, so does the need for sustainable aquaculture practices. In order to meet this demand in a sustainable way, it is important to ensure that mussel farms are well-managed and that the environment is protected.