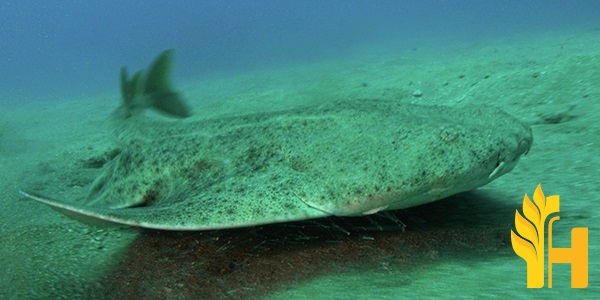 Where to buy and sell Angel Shark, lowest (cheapest) and highest price.

An angel shark is a type of marine fish belonging to a single genus of 22 species of sharks, The fish belongs to the Squatinidae family and is characterized by its flat body and head shape. The shark is native to the coasts of Mexico, California, Costa Rica, Chile, and Alaska.

The fish naturally prefers warm waters and inhabits bays and estuaries. Its natural habitat is the sand near the coral reefs no deeper than 490 feet. The fish spends the majority of their time buried in the sand.

Its characteristic appearance makes the fish easy to recognize. Angel shark is flat and has large pectoral fins. The fins look similar to wings which makes them quite similar in the terms of look rays. It has two dorsal fins, a pair of barbels, 5 pairs of gills, a wide mouth with strong jaws, and a pair of eyes located on the top of the head. The fish lacks an anal fin. It is usually dark in color and can appear in black, brown, grey, greenish, or reddish depending on the species. The skin is covered with dark and white spots on the back and sides of the body. The coloration is a fish’s natural way of camouflage.

Angel shark is a carnivore and thanks to its appearance is a perfect ambush predator. It lays motionless covered in sand and waits for its prey. It is not a very aggressive shark species and human-related attacks are very rare. They are not deadly but due to their long and sharp teeth, the fish can cause serious and painful injuries.

These animals have been marked as nearly endangered species by the International Union for Conservation of Nature and Natural Resources (IUCN) because of overfishing. The number of species has been greatly decreased by the unintentional capture in the commercial fishing nets, recreational fishing as well as the climate change, and habitat degradation. It is believed that almost half of the known species may be endangered or critically endangered by 2020.

Angel shark mates usually in spring. The fish is an ovoviviparous animal. The eggs hatch inside the female’s body in a period of 8 to 10 months. A single female usually delivers up to 13 babies but less than 20% of young sharks survive. Adult sharks may live up to 30 years.

Even though angel sharks are found in many different parts of the world, they are not necessarily fished in all of these areas. In fact, global production of angel sharks is thought to be quite low, with most of the fish coming from just a few countries. The majority of angel sharks that are caught are done so as bycatch, meaning that they are not the target species of the fishery. This is often the case in bottom trawl fisheries, where angel sharks are sometimes caught along with other fish that are being targeted. As a result, it can be difficult to get accurate information on exactly how many angel sharks are being caught each year. The best estimates suggest that the total global production of angel sharks is around 10,000-15,000 metric tons each year. The vast majority of this fish is caught in just three countries: Spain, Morocco, and Portugal. In fact, these three countries are thought to account for over 80% of the world’s total angel shark catch.