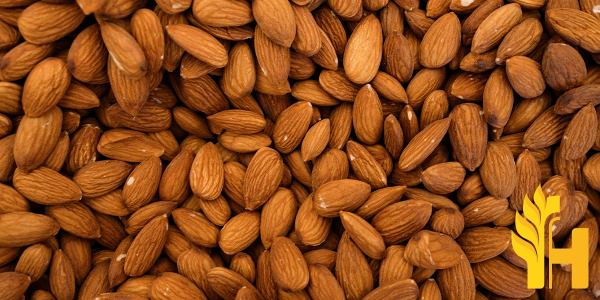 Almonds are one of the most popular types of nuts loved by many all over the world. It is a seed of the almond tree. Almond trees are native to North Africa, India, and the Middle East. It is almost sure that almonds were one of the first types of foods cultivated by humans. The nuts are mentioned in the Bible and were an important ingredient of bread served to Egypt’s pharos. It was a source of energy and nutrition for travelers on the „Silk Road” between the Mediterranean and Asia, and thanks to that Almond trees were introduced to Spain and Italy. Franciscan Padres brought the trees to California in the mid-1700s. The tree is best cultivated in warm, dry regions with mild and wet winters. The tree has two main cultivars Prunus amygdalus var. dulcis and Prunus amygdalus var. Amara. The first is cultivated mostly for its sweet nuts, the other one to produce almond oil.

The almond tree is a deciduous tree that grows up to 10 meters. Its leaves are up to 13 cm long. It is characterized by its white and pale pink flowers which appear in spring before leaves. It creates green fruits with a thick, leathery coat. The fruit is also known as the hull. The fruit covers a hard shell with an edible seed – the almond nut. Almonds are not really nuts from the botanical point of view, but they are used just like other nuts, especially in culinary use.

100 grams of almonds contains 578 calories. They are a rich source of vitamins, especially vitamin E and B, calcium, phosphorus, magnesium, and iron. Almonds also contain selenium, copper, niacin, and zinc.

They have many health benefits and are usually used to bring relief with coughs, heart disorders, impotency, diabetes, respiratory disorders, and constipation. They are also great for the condition of hair, skin, and teeth.

The largest production of almonds takes place in California where up to 80% of the total world’s amount of almost is produced. Each year almost 3 214 522 tons of the nut is produced. The second-largest producer of almonds is Spain, with almost 202 339 tons produced each year. Other countries that produce almonds are Tunisia, Morocco, Portugal, Turkey, Greece, Italy, and Iran.