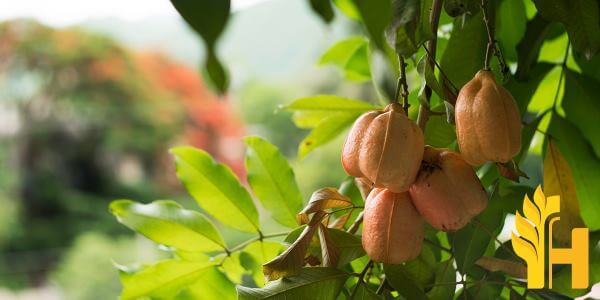 The ackee, also known as ankye, achee, akee or ayee, is a plant of the Sapindaceae soapberry family, just like lychee. It is also known as Blighia sapida. It is a fruit with many culinary uses, and in fact, it is used in a Jamaican national dish: ackee and saltfish. In fact, ackee could be nominated as the country’s national dish.

This exotic fruit grows on evergreen trees which can be up to 9 meters tall all year long. The trees are characterized by their compound leaves and white flowers with a pleasing smell. It is native to West Africa but was introduced in the Caribbean with the transfer of slaves. It is bright red with two to four creamy-colored sections inside. The inside of the fruit is covered with soft bright flesh that covers large and glossy dark, almost black, seeds. To eat the fruit, its seeds need to be removed from the flesh. The fruit also needs to be peeled from its soft, red skin. The flesh should additionally be washed before consumption.

Many people claim that the flesh of the fruit looks just like scrambled eggs. However, the taste of this fruit is nothing like eggs. It tends to be a little bit bitter, and when cooking has an almost nutty flavor.

Jamaica is the main producer of ackee in the world. It is also cultivated on a small scale throughout tropical and subtropical regions. The fruit is hard to found fresh in countries other than Jamaica. Exports of ackee are under strict control because unripe fruit may be poisonous and lead to a disease called Jamaican vomiting. The unripe fruit contains large amounts of hypoglycin, an unnatural amino acid, which may be dangerous for consumers. Fresh fruit can be frozen or used right away. It can also be found canned and then stored for a long time. Cooked fruit can be stored for up to four days in the fridge.