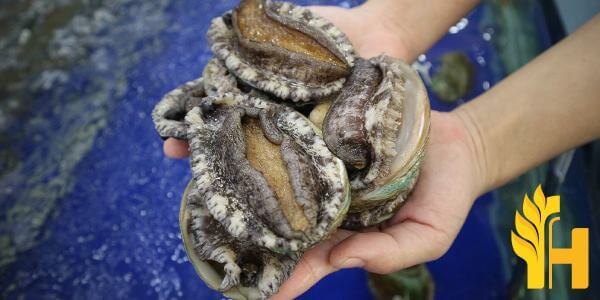 Where to buy and sell Abalone, lowest (cheapest) and highest price.

Abalone, also known as sea ears, muttonfish or muttonshels, is a type of a gastropod mollusk proclaimed the most valuable shellfish in the world. It is native to Oceania, Mexico, the USA as well as the Ind-Pacific region. It is also commonly found in the UK and Normandy.

Abalone is not only known for its delicious and delicate meat but also highly aesthetic, polished shells with the iridescent colorful carapace. It can be found in wild on rocky outcrops where it searches for food. The shell is usually very tightly connected with the rock, that is why wild species require high skill, time, and dedication to be collected. Due to the complicated capturing, abalone is one of the most expensive shellfish available on the market. They usually live in places hard to reach and camouflage themselves. Additionally, the species is in danger of extinction, which led to capture limits in many countries. Some regulations are as strict as only 20 of them can be captured daily by a fisherman.

It is a very common dish ingredient in Southeast Asia cuisine, especially in Japan where it is called the ‘truffle of the ocean”. The price of wild abalone may be as high as $500 per kilo, taking into consideration the limitation of fishing in many places as well as the huge demand for this delicacy. Abalone is usually used as the main ingredient of sashimi, tartare, or carpaccio. It can be consumed raw thanks to its soft texture. It is also cooked and often served with butter and shrooms.

Growing popularity and demand for this mallet resulted in the formation of abalone farms. It began in the early 1950s in Japan and China. The extensive fishing significantly reduced the wild population of this animal that is why most of today’s market is supplied from farms. Apart from China and Japan, abalone is produced in Korea, Taiwan, Australia, Chile, Canada, Ireland, Mexico, New Zealand, Spain, Thailand, and the United States. The largest artificial farm was created in 2012 in Flinders Bay, Australia. So far it is the largest abalone farm in the world.

According to the Food and Agriculture Organization of the United Nations (FAO), global production of abalone was estimated at 16,719 tonnes in 2016. The majority of this production comes from aquaculture, with wild-caught abalone accounting for a relatively small proportion. The top five abalone-producing countries are China, Japan, South Korea, Chile, and Australia. China is by far the largest producer of abalone, with an estimated production of 15,846 tonnes in 2016 – accounting for over 94% of the world's total. This is followed by Japan (with an estimated production of 521 tonnes), South Korea (315 tonnes), Chile (298 tonnes), and Australia (287 tonnes). The global abalone market is valued at around US$1.2 billion and is experiencing strong growth. The Asia-Pacific region is the largest market for abalone, accounting for over 60% of the total demand. China is the biggest driver of this demand, followed by Japan and South Korea. The strong growth in the global abalone market is being driven by the rising popularity of this seafood delicacy in Asia, particularly China. Abalone is considered a luxury item and its consumption is seen as a sign of wealth and status. The Chinese government's crackdown on corruption and gift-giving has led to a decline in demand for abalone in recent years. However, this has been offset by the growing popularity of abalone among the middle class. The global abalone market is expected to continue growing in the coming years, driven by the rising demand from Asia. The region is expected to account for an increasing share of the total market, due to the continued economic growth in countries such as China and India. The rising middle class in these countries is expected to drive the demand for abalone, as it becomes increasingly seen as a status symbol.